The initiative presented by the students of Cumcumyaque School, Caren School, Llaima Volcano School and Los Andes High School during the celebration of the 81st anniversary of the commune.

As part of Melipeuco's 81st anniversary, students from Cumcumyaque School, Caren School, Llaima Volcano School and Los Andes High School presented their recycling campaign "My waste, my responsibility" to the community in a series of activities that culminated in a ceremony in front of the Town Hall.

The initiative was promoted by the students of these educational establishments, within the environmental certification program of the Ministry of Education (SNCAE), promoted by the Department of Education of the Municipality of Melipeuco and the renewable energy company Latin America Power (LAP) in different schools of the commune, with the aim of generating a comprehensive strategy to address environmental education in the area.

The mayor of Melipeuco, Alejandro Cuminao, stressed the importance of continuing the path of recycling and urged continued support for the territorial plan promoted and directed by the Environmental Unit of the Municipality of Melipeuco.

The activities of this campaign included recycling workshops in the classroom, construction of clean points in schools and in the Caren sector, among other initiatives.

The HSSE manager of Latin America Power, José Salgado, emphasized LAP’s commitment to education and the culture of the territory. “For us it is important to be able to participate in these activities whose main objective is to actively support different educational establishments in the area, and at the same time encourage young people to take care of the environment through projects that are so important for the community of Melipeuco”. 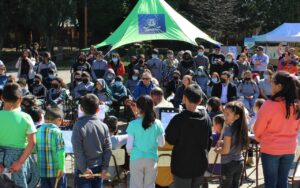 The event also included a stand where the children showed to the community the work done and an artistic show, where the great work done in the commune by the Papageno Foundation, who work teaching music to students from rural schools in Melipeuco, could be appreciated. In addition, the Juana González Band was presented, an artistic-musical project aimed at working with children from Malalcahuello, considering the care of the environment and the Kutralcura Geopark as the main theme of their presentation.